2023.01.24 – As a strong reminder - my comments on this website are my own and do not reflect the views or perspectives or official policies of any government agency.

Recently I posted a tiny rant on LinkedIn about how, having been on both sides of the fence, I am utterly baffled by vendors cold-calling a government employee to try to sell the government something. As I explained there - I do not buy anything, instead the government has a very long and arduous process of solicitation and evaluation in which I am only peripherally involved. Well, that post got a lot of attention - at the moment, it’s one of the most popular things I’ve posted on LinkedIn with over 25,000 views. (I wish my YouTube channel was getting those numbers!) I also received a lot of comments and questions on that post. I don’t want to waste your time, and I don’t want you to waste mine either, so below I’ve suggested a few strategies on how salespeople can be more effective at their jobs with less or no cold-calling.

Speaking of not wasting time… You may not agree with everything I’ve stated here - and that’s ok! I’m definitely overgeneralizing, and moreover your experience will differ from my own experience as a vendor. But, and I want to be absolutely clear here - you don’t need to tell me about it. Sending a dozen comments on how Very Wrong I Am On The Internet will not make either of our lives any better and is not a good use of time. 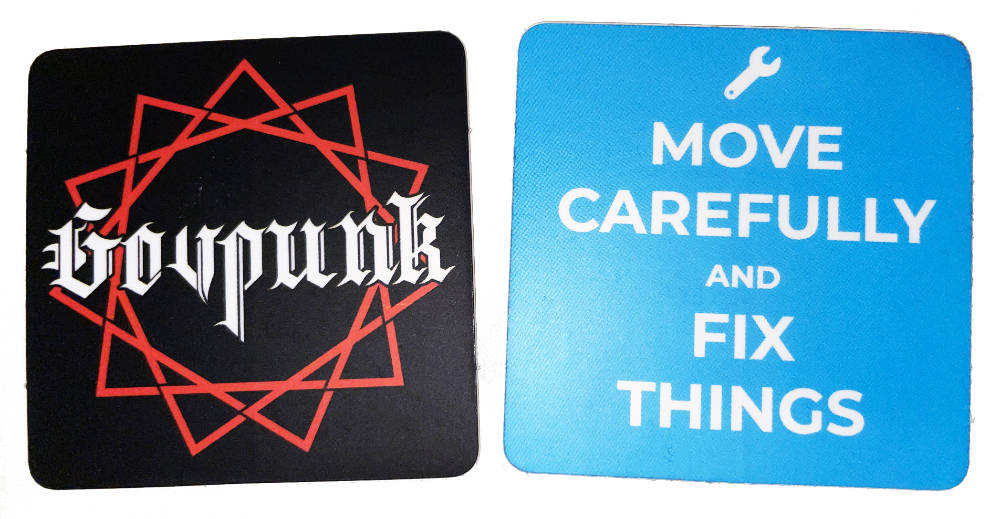 Well, it’s a new year, so it’s time to relaunch my sticker program! I’ve added an additional new sticker design as well, Govpunk, in addition to my old Move Carefully and Fix Things stickers! Get a Free Sticker here!

2023.01.03 – I realized that I don’t do a very good job of writing full posts on here about my projects as I release them. So before I start on any new work for 2023, here’s just a quick recap of the many projects I worked on (outside of work) this year:

Amazing what you can do with some free time and a bunch of unfocused manic energy. A lot of this work falls under my concept of Making the Web Weirder, and in 2023 I hope to dedicate even more time to silly little projects to make the world a weirder and more delightful place!

2022.12.30 – I’ve been thinking a lot lately about how we build communities and manage content. Now that I’m helping to run a Mastodon community, I’ve realized something about the current paradigm that doesn’t sit well with me. In another article, I talked about how we used to share things that we love on the internet. The focus in most communities these days, however, is not about sharing, but rather keeping out negative influences and bad actors - about moderation. I think this is the wrong end of the stick. Rather, instead, we should be focusing energy on curation. We should be maintaining lists of things, ideas, and people to share with each other - rather than spending so much time maintaining ever-shifting lists of hostile attackers. (That being said, there will always be a need for moderation, and any curation must come with discarding unsuitable content. I’m not so naive from privilege to overlook this critical aspect. But back to my core point…)

One way that we can better share things and build community is by bringing back the old concept of the Webring. For the last few years I’ve been a very tiny webring with a few friends. You may have seen the link at the bottom of this website and thought it was a joke, but this is a fully-functional webring! In the last few weeks I’ve modernized this webring further, adding support for RSS feeds (and OPML subscriptions), FOAF files, and other old-but-still-relevant technology standards. This means that instead of having to click around to a dozen different websites in a ring, you can use your favorite feed reader to subscribe to an entire webring with one click! And moreover, most modern feed readers support the ability to use a remote OPML file - meaning that as folks join and leave the webring, your subscription will be updated to match with no additional work needed! That’s great for those of us that long-blog a lot, but this also has potential applications for folks who microblog - Twitter and Mastodon are microblogging platforms at their core. (More work is needed to make replies and cross-posting viable of course.) Since more folks are getting back into blogging, I want to support this more directly. As such, I’ve created an open source Webring Starter Kit that anyone can take and use to host their own webring for free. It’s powered by Jekyll and can be run on GitHub Pages, and requires very little technical knowledge to get up and running. If you’ve got a couple of friends and want to start blogging together about some weird topic, this is a great way to bring those ideas together and make it easier for new folks to find your content! I hope folks with take this and run with it, and come up with new ways of curating content that I haven’t even considered yet. Let’s share things y’all, and make the web weird! Also if you want to join the Public Interest Tech Webring, please get in touch!

2022.12.30 – Over the last few months I abandoned Twitter and started using Mastodon. I subsequently ended up starting a new mastodon community of public interest tech folks. Through this process, as well as updating my policy bot to run in this new environment, I’ve learned a bit about the technology being used here. At its core, Mastodon is a jumble of open standards, most notably ActivityPub. As the name indicates, this is a publishing model - that is, it’s a “push” architecture. When someone “follows” you on Mastodon, they’re adding their name to a list of subscribers on your server, and when you publish a new post, your server then sends it out to those people. However, Mastodon is also federated which effectively means that copies of your content end up on the followers servers as well. This is in contrast to, say, the Twitter model where everything lives on a single website that everyone is already on, or the RSS feed model, where you pull rather than push new content from the host website. The result of this is that it can be very problematic to have a single popular person on an instance that you run - an underprepared server can quickly be overwhelmed by such a chatty protocol at the core of things. And moreover, caching layers can do very little here to soften the blow. You cannot run a mastodon-like service as a static website. Those are problems fundamental to ActivityPub, not just Mastodon - but Mastodon has some rather prevalent issues as well. It’s good software, but there’s no way around the fact that it’s bloated. A massive React frontend sits atop a Rails application - you simply cannot build the assets on a server with less than 2Gb of RAM. The developers seem like sharp folks, but they also are very slow to adopt features which already exist in their competitors. My corner of the Fediverse has been up-in-arms over the fact that quoted-posts are not enabled (though “quote-Tweets” have existed on Twitter for quite some time). I am not a fan of this particular feature myself, as I believe that it encourages abusive behavior. But moreover, other key features to curb abuse are notably missing, such as turning off replies to individual posts, though a request for the feature has been open for four years. More than just technical shortcomings, this is turning a blind eye to the needs of the communities they are supporting. (There is, of course, also Darius’ brilliant fork called Hometown which is somewhat more thoughtful in this regard.)

However, Mastodon serves an important purpose - it gets people used to the concept of decentralization again. The 2010s brought a wave of centralization of social platforms, resulting in just a few huge places that everyone spends their time. Mastodon is once again teaching folks how to spread out and build their own small communities. It also exposes some of the old pain points, most notably the problem of finding your people online. Hopefully this friction will nudge folks towards more collaborative and sustainable methods of finding people of shared interests.

2022.11.28 – TLDR: Put a damn links page on your blog! And a FOAF file if you’re especially nerdy! Skip the rant and jump to the technical discussion of how we fix this.

I’m hoping to build more tools for exploring these sorts of connections in the near future to help with discoverability and to maintain these networks in an increasingly-decentralized world. A few ideas I’m tinkering with: As always, these are just my half-baked ideas! I’m looking for more folks to have discussions with how we can better build these networks. If you want to talk about it too, tag me in a post on mastodon or just send me an email! Welcome to the infodomain, Cyberpunks.